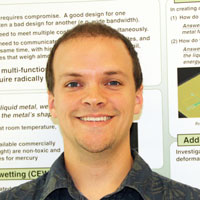 Ryan Gough uses low-power, low-voltage electrical signals to manipulate liquid-metal elements, which could be integrated into modern electronic devices without having to overhaul how a device is put together. A metal droplet that can be wiped clean (like an Etch-a-Sketch) would allow a device to operate across multiple environments. The ARCS award will allow him to submit his work to international conferences and to support his family without incurring further student loan debt. A former Lockheed Martin Aeronautics employee, he was a finalist in the 2014 International Microwave Symposium student paper competition. He is a fan of baseball and enjoys hiking, star-gazing and, when time permits, reading history and fiction. 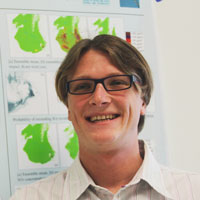 Andre Pattantyus performs research to update and validate the vog model, which predicts the impact of volcanic emissions on air quality. Improved forecasting will allow people adversely affected by vog to better plan activities. His work has been published in the Journal of Applied Meteorology and Climatology, and he has received the Edward and Lee Hill Snowdon Fellowship, Link Foundation Fellowship and American Meteorology Society student travel grants. He will use his ARCS award to fund travel both to the Big Island for research and to conferences, and to purchase research materials, such as data storage. He hopes to conduct operational weather research, preferably in the field of renewable energy. He enjoys hiking, surfing, snowboarding, soccer, rock-climbing, sailing and traveling. 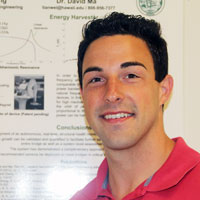 Michael Bell is working to create a more accurate measure of displacement caused by dynamic load using inexpensive sensors to gauge vibrations. The results could improve monitoring of the structural health of bridges and buildings and better assess damage from earthquakes. The ARCS award will assist with travel throughout the Hawaiian Islands to expand his research.

He plans on a career in academia. A member of the 2007–08 Big Ten championship gymnastics team, he enjoys tutoring and teaching, hiking, fishing and team sports. 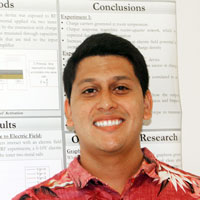 Richard Ordonez studies graphene integrated Complementary Metal Oxide Semiconductors (CMOS) devices under RF (radio frequency) radiation to develop a sensitive detector for the Navy. The patent-pending transfer process also has potential application as a non-oxidizing coating for electrodes. He will use his ARCS award to purchase a laptop computer to aid in his research, travel to Washington, D.C., to present his work and help pay off student loan debt. He was a first-place winner at the 2012 Pacific Asian Center for Entrepreneurship Breakthrough Innovation Challenge, part of UH’s 2009 Institute for Electrical and Electronics Engineers Micromouse Regional Competition fifth-place team and a 2014 Leeward District High School Science and Engineering Fair mentor award recipient. He is a watersports enthusiast and likes to hike, run, and ride his bike with his wife and three dogs. 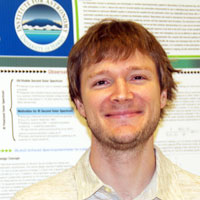 Thomas Swindle applies new technologies in sensitive spectropolarimetry to observations of the polarized sky, aurorae, and solar photosphere. Sensitive and accurate daytime sky polarization measurements are needed to calibrate large aperture telescopes. He has also worked on an infrared fiber spectropolarimeter ro reduce distortion and spurious signals caused by scattering processes in the upper solar atmosphere. He will work with the Air Force Research Laboratory to improve the high-resolution visible/infrared spectropolarimeter in operation on the Air Force 3.6m telescope atop Haleakalā, which contributes to significant stellar astrophysics research at UH, and foster new collaborative efforts to maximize the scientific efficiency of the summit observatories. An Air Force Research Laboratory SMART (Science, Mathematics And Research for Transformation) Fellow and certified pilot, he hopes to become an NASA astronaut. 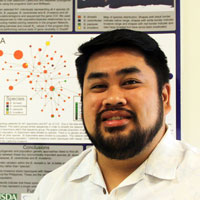 Michael D. San Jose sequences the DNA from 100s of species of Bactrocera fruit flies and conducts population genetic/genomic studies to develop a reliable tool for identifying a plant pest that costs the U.S. agricultural industry millions of dollars a year in eradiation efforts and identify origins of invasions. He will use his ARCS award to help pay for molecular supplies and next-generation sequencing costs, as well as to help pay for travel to Brazil to present his research at the Evolution Conference in 2015 and to Southeast Asia to collect more specimens for his dissertation. He enjoys traveling, gardening, hiking, surfing and snorkeling. 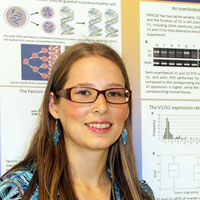 Anna Pickering has found evidence of a suspected connection between a rare inherited blood disorder called Fanconia anemia and gene mutations that cause cancer. The results could contribute to improved cancer prevention or treatment. She has been published in Cell Cycle, Oncotarget and Cancer Biology and Therapy. Her ARCS award will cover living expenses and student fees not covered by her stipend.

She does conservation work as a volunteer and enjoys traveling, birding, hiking, scuba diving, playing the piano. 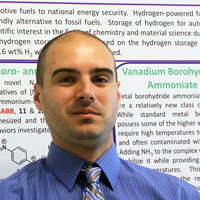 Paul Beaumont is working to develop a new and better hydrogen storage material based on ammonia-borane (H3NBH3, AB). The simplicity of the AB molecule allows for greater tunability and material optimization, allowing for more favorable dehydrogenation temperatures and increased amounts of utilizable hydrogen per molecule. He synthesizes, characterizes and investigates dehydrogenation behaviors of AB, analogue complexes and innovative materials derived from AB. He will use his ARCS award to purchase additional chemicals, supplies and/or services and to supplement travel funds. A recipient of the 2013 American Chemical Society Zuckerman Award for Inorganic Chemistry, he enjoys swimming, snorkeling, running and baseball. 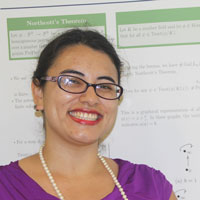 Bianca Thompson explores the intersection of two mathematics fields—dynamical systems that change over time (like weather) and number theory. She investigates mathematical twists and has proven statements about the proportions of strictly periodic points in extensions of finite fields; that is, points that return to themselves under iteration in certain finite sets. A National Science Foundation K–12 fellowship recipient, she wants to pursue research and bridge the gap between K–12 and higher education. She studies Western Martial arts, namely 14th century Italian long sword techniques, and enjoys singing when given the opportunity. 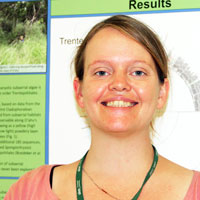 Emily Johnston tests hypotheses about land colonization by aquatic organisms by looking at the genes of Hawaiian Cladophorales algae species, which have made the difficult transition at least three times. Her goal is to be a NASA project leader studying genetic adaptations that would allow different microorganisms to survive and colonize environments outside of Earth, where they would be important for oxygen production, waste recycling and as potential fuel and food sources. Her diverse interests range from hiking and snorkeling to writing mystery stories to growing orchids and culinary herbs. A Citizen Science Zooniverse Project volunteer,she identifies galaxies in pictures taken by the Hubble Telescope and looks for stars that may be forming planets. 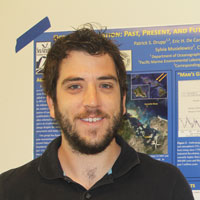 Through field and lab research, Patrick Drupp focuses on how the decline in ocean pH—a byproduct of burning fossil fuels—affects tropical reef environments. He is particularly interested in the sediments that make up the framework and “cement” of the reef. He seeks to understand how and when the interactions between chemistry, physics and biology will change in response to increased carbon dioxide over the next century, increase public awareness about ocean acidification and influence policy. His ARCS award will pay repay student loans and fund a visit ro family in Hanover, Penn. He enjoys rugby, scuba diving, rock climbing, backpacking and woodworking.