Recognizing that an affinity for science must be cultivated early, ARCS Foundation Honolulu has supported the Hawai‘i Academy of Science in its sponsorship of state Science and Engineering Fair competition for secondary school students. The two organizations also cross promote the Honolulu Chapter’s occasional Pau Hana talks and field trips and the academy's Honolulu Science Cafe, a monthly program featuring speakers on a variety of scientific topics.

Bred in Hawai‘i: The ARCS Anthurium 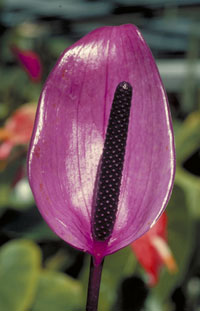 The ARCS anthurium was bred by University of Hawai‘i horticulturalist Haruyuki Kamemoto and named in honor of the ARCS Foundation in recognition of the Honolulu Chapter's support of graduate students in the College of Tropical Agriculture and Human Resources and other University of Hawaiʻi at Mānoa programs.