His work on creating dynamically reconfigurable circuits and antennas using liquid metals (which brings to mind the futuristic shape-shifter in the Terminator movies) also drew the attention of a North Carolina professor considered to be the nation’s foremost expert in this area, who flew to Honolulu to attend Gough’s dissertation defense. Gough uses low-power, low-voltage electrical signals to manipulate liquid-metal elements, which could be integrated into modern electronic devices without having to overhaul how a device is put together. A metal droplet that can be wiped clean (like an Etch-a-Sketch) would allow a device to operate across multiple environments.

Those who nominated Gough for the UH research award wrote that “He is unmatched in writing extramural proposals, communicating to a wide array of audiences, mentoring undergraduates, and providing service to the professional community.” He was peviously a finalist in the 2014 International Microwave Symposium student paper competition. Gough is a former Lockheed Martin Aeronautics employee and a graduate of Texas Tech and Southern Methodist Universities. He used his ARCS Scholar award to submit work to other internaional conferences and support his family without incuring additional student loan debt. 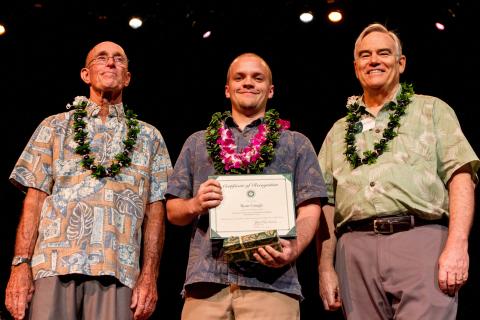