ARCS Scholar H. Jabran Zahid has received the Robert J. Trumpler Award, given by the Astronomical Society of the Pacific to recognize a recent PhD thesis considered unusually important to astronomy. 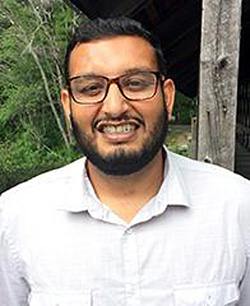 Zahid’s thesis work measured the chemical evolution of galaxies using existing and new data from large extragalactic surveys and compared these results with the predictions of cosmological simulations. He completed his PhD at the University of Hawai‘i at Manoa's Institute for Astronomy in 2014, one year after receiving the ARCS Foundation Honolulu Chapter's Columbia Communications scholar award. He is now a Clay Postdoctoral Fellow at the Harvard-Smithsonian Center for Astrophysics.

Highly motivated to understand his observational results from a theoretical perspective, Zahid extended this work by developing the theoretical links between galactic chemical evolution, dust and star formation in galaxies.