ARCS Foundation Honolulu Chapter held its annual Heart of Gold fundraiser on Saturday, February 13, 2013 at the Outrigger Canoe Club. It was a small but very congenial group who came together to honor the chapter’s Golden Hearts, Mr. and Mrs. George Elmore. 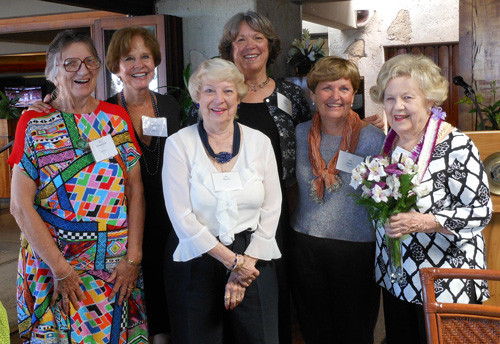 Mona Elmore, a chapter member, and her late husband have been strong ARCS Foundation supporters for many years, most recently as sponsor of the Honolulu Chapter’s annual Scholar of the Year and Scientist of the Year awards. The gracious and warm-hearted Mona has insisted that her late husband join her in being acknowledged due to his vision as well as his generosity. “He liked what he saw,” Mona says with a twinkle in her eye. 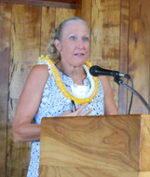 Special guest speaker Gail Grabowski, professor of environmental studies at Chaminade University, struck a cord with her story of her personal ordeal with colon-rectal cancer.  She was no mere victim of her cancer, stressing the importance of her active participation in her recovery.

Applying her research-based approach to science to her treatment, she kept track of the types of food she ate, her lipase functions and her chemotherapy drug on a daily basis on a spreadsheet, identifying patterns and interactions that influenced treatment decisions.

A long-distance swimmer, she also exercised in the garden during her long hospital stays. Another patient, inspired by her efforts, calculated the number of trips around the hospital ward hallway it took to complete a mile of walking.

The scientific-minded ARCS members enjoyed Gail’s presentation very much and peppered her with questions and comments after the luncheon.

The setting on Waikiki’s Gold Coast, the orchids on the auction table and the informal welcome by Honolulu chapter President Cheryl Ernst added to the languid air of a special tropical luncheon. Visiting from London, returning ARCS Honolulu scholar Dr. Philomena Verlaan spoke briefly but fervently about the importance that her two awards have had on her career.

Members were delighted to see Yvonne Elliman, a life member who resides in New York, and new member Caroline Ellermann, who recently moved to Hawaii from Arizona, as well as welcoming Mona’s repeat guest Sue Thacker, who will be rejoining the chapter.