Planet Hunter is 2016 ARCS Scholar of the Year

An astronomy doctoral candidate whose software automated the search for small planets has been named the ARCS Foundation Honolulu 2016 Scholar of the Year. Benjamin “BJ” Fulton received the 2016 Columbia ARCS Award in Astronomy. He was one of 12 University of Hawai‘i at Manoa graduate students awarded unrestricted grants from the foundation’s Honolulu chapter, which has been supporting outstanding UH doctoral candidates in STEM fields since 1974.

Fulton (pictured at observatories on Mauna Kea in Hawai‘i) developed software to robotically hunt for sub-Neptune mass planets around 51 nearby stars using the Automated Planet Finder telescope at the Lick observatory in California. He has already found two on the way to developing a census of small planets orbiting Sun-like stars within about 100 light-years of Earth. Fulton previously received a National Science Foundation Graduate Research Fellowship and UH Manoa’s Student Excellence in Research Award and has been published five times in as many years.

Fulton beat out 11 other 2016 ARCS Scholars in contention for Scholar of the Year:

With steep, densely vegetated volcanic terrain and high rainfall, Hawai‘i is primed for landslides. Working with the state Department of Transportation, Iwamoto collects GPS, geotechnical and hydrological data on slopes along O‘ahu’s Pali and Likelike Highways to develop a physically based early warning system that would allow officials to predict when rainfall could create a risk of landslides and warn the public or close the roads. She holds a BS and MS in civil engineering from UH Manoa.

Robert Nakata, Department of Electrical Engineering, Bretzlaff Foundation Award in Engineering
Unmanned Aerial Vehicles (UAVs) are an ideal platform for rapidly deployed remote sensing for security and post-disaster recovery operations. Nakata investigates sensors and feedback stabilization techniques to make signals more reliable. He recently received a patent for a motion capture virtual reality system he likens to a “GPS of the body,” which he built with an off-the-shelf processor and custom antenna.

John A. Burns School of Medicine

Glen Chew, Department of Tropical Medicine, Medical Microbiology and Pharmacology, Ellen M. Koenig Foundation Award in Medicine
Chew investigates receptors on the surface of certain lymphocytes that keep them from eliminating infections and cancers, including HIV-infected cells. He wants to block the inhibitory receptors, essentially keeping lymphocytes “switched on” to better control HIV infection. The work was published in PLOS Pathogens in January.

Amanda Lee, Department of Cell and Molecular Biology, Starbuck ARCS Award in Medicine
Buildup of urine caused by an obstruction in the ureter is a leading cause of kidney disease in newborns. Lee uses a mouse model to understand when and why the blockages occur during embryonic development. Characterizing the changes observed in the cells of the urinary tract of mice with the obstruction could lead to potential therapeutics. Amanda received the 2015 Best Graduate Student Presentation at JABSOM’s Biomedical Sciences and Health Disparities Symposium. She holds a BS in microbiology from UH Manoa.

School of Ocean and Earth Science and Technology

Lindsey Benjamin, Department of Oceanography, Helen Jones Farrar Award in Oceanography
Benjamin examines time series in shallow waters at Penguin Bank off O‘ahu’s Kokohead to look for evidence of meteotsunami—tsunami-like waves generated when rapid changes in barometric pressure cause displacement in a body of water. Meteotsunami can cause flooding and significant damage. Her paper on high frequency Doppler radio observations and current simulations modeling was published this year in the Journal of Geophysical Research: Oceans. She holds a BS in global environmental science, BS in physics and MS in oceanography from UH Manoa.

Emily First, Department of Geology and Geophysics, Toby Lee Award in Geology and Geophysics
First conducts small-scale laboratory experiments at high pressure and temperature. She makes tiny bits of homemade rock under precisely controlled conditions and compares them to samples from Volcan Quizapu, an Andean volcano in southern Chile to study the processes that determine whether eruptions are explosive or non-explosive. This is her second ARCS Scholar Award. She holds an MS in geology and geophysics from UH Manoa.

Amy Marie Hruska, Department of Botany, Maybelle Roth Award in Conservation Biology
On remote islands, plants and animals develop very specific relationships. But what happens to native plants when the population of native birds that disperse their seeds dwindles? Hruska will examine factors related to native plant survival, test techniques to encourage native plant growth and try to determine whether some non-native birds can be serve as substitute seed dispersers.

Andrew Turner, Department of Chemistry, Sarah Ann Martin Award in Chemistry
Turner simulates interstellar conditions in the laboratory to identify possible extraterrestrial sources of organic compounds needed for life on Earth. He studies the reactions of phosphine, water, carbon dioxide and hydrocarbons in an attempt to explain the formation of alkylphosphonic acids, which are the only phosphorus-containing organic compounds that have been discovered on meteorites. Interested in teaching at the undergraduate level, Turner twice received the University of Hawai‘i Outstanding Teaching Assistant Award.

William “Bill” Wright, Department of Information and Computer Science, Sarah Ann Martin Award in Information and Computer Science
Wright looks for clues about personality in people’s writing, such as what word choices and grammar structures, say about how extraverted a person is. Potential benefits range from timely adjustments in teaching strategies and improved technology interfaces to diagnosis and treatment of stroke and autism spectrum disorder and detection of criminal or terroristic activities.

Jamal H. Hassan Haidar, Department of Mathematics, Sarah Ann Martin Award in Mathematics
Complex multiplication fields have a lot of applications in number theory and have been harnessed by the likes of Microsoft. Haidar examines the behavior of the ideal class number, which essentially measures the failure to obtain a unique decomposition of an element into its smallest pieces. His work involves computing various statistical aspects that model the growth rates of these objects.

Marla Chassels, Department of Anthropology, Maybelle Roth Award in Conservation Biology
Chassels examines human-tiger relationships in Thailand—how tiger conservation projects affect people living in and around protected areas (national parks, wildlife reserves, etc) and whether programs could be improved to better meet both the interests of local peoples and the objectives of tiger conservation. 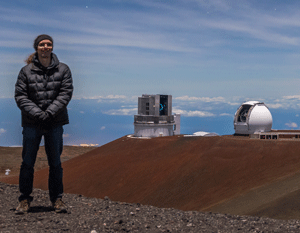