Betting on the WIMPS

First hypothesized in 1933, dark matter is believed to make up a little more than a quarter of all the matter in the universe. It cannot be seen, but its presence is inferred from the gravitational affect it has on the smaller quantity of visible matter. A promising candidate for the constituents of dark matter is Weakly Interacting Massive Particles, or WIMPS.
As part of the DarkSide collaboration, ACRS Scholar Erin Edkins is involved in the search for WIMPS using the DarkSide-50 detector in Italy. Although particles of dark matter have no charge of their own, they should produce a  small signal when they occasionally bounce off the nucleus of a normal atom, she explains. The problem is that neutrons produce identical signals when they bump into a target atom.
The University of Hawai‘i at Manoa doctoral candidate in Physics seeks to separate these mimics from the real thing—a process she calls “seeing in the dark.” DarkSide-50 is a liquid argon dark matter detector surrounded by a liquid-filled neutron detector, located inside a muon detector deep in one of Italys highest mountains. Edkin’s research focuses on understanding and improving neutron detection efficiency to increase sensitivity in detecting dark matter particles. By directly measuring DarkSide’s neutron tagging efficiency, scientists can veto neutron signals and look for actual WIMPS, she says.
The Morro Bay, Calif., native enjoys travel, reading, teaching and, whenever possible, spending time outdoors enjoying Hawai‘i. The 2015 Sarah Ann Martin ARCS Award in Physics has helped with student fees and living and travel expenses. 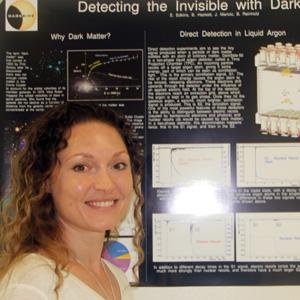