The ARCS Angel award is presented at the discretion of the Honolulu Chapter president to an individual who has provided exceptional support to the ARCS Foundation Honolulu Chapter's mission of advancing Science in America. Recipients include: 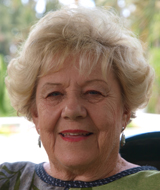 Originally from California, Mrs. George (Mona) Elmore moved first to Kaua‘i and then relocated to O‘ahu in 1986. ARCS was a natural fit for Mona, who loves to learn and explore new frontiers. Since retiring from a career in education, she has traveled the world seeking new cultures and adventures that most of us can only imagine. When at home “resting” in Hawai‘i, Mona maintains a busy schedule of social and cultural events. She is a strong supporter of local arts in addition to her active participation in ARCS field trips and fundraisers. She demonstrates keen interest in the work of University of Hawai‘i at Mānoa scientists through her enthusiastic and intelligent questions. She has generously sponsored the ARCS Foundation Honolulu Chapter's Scientist of the Year and Scholar of the Year awards for a number of years and shares her enthusiasm for ARCS Foundation, Inc., by hosting friends at luncheons and other events.

ARCS Light Award for Exceptional Support of the Honolulu Chapter

The ARCS Light Award is presented by the Honolulu Chapter president to a member who has provided exceptional and/or long-term service to the organization. Awardees have been active members for at least three years, served in a variety of committee and board roles, given continuous service that has had a positive impact on the chapter and been an exemplary representative of ARCS Foundation, Inc. to fellow members and the community. Recent honorees include: